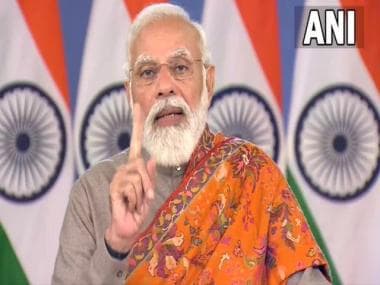 Reform is a can of worms.It was tough for Margaret Thatcher, but she stuck to her guns.

Reform in the national interest, something Prime Minister Narendra Modi has chosen as his mission too, is always difficult.It displaces the hold of various vested interests and elites.But great leaders historically have tended to cast themselves in a heroic mould.They made a virtue out of not yielding or retreating.

However, in a post-modernist world, all bets are off.U-turns and changing goalposts are no longer ignominious.New management gurus tell us, that flexibility allows the leader to come at the problem from another side.

Obduracy is obsolete and restrictiveModi, the reformer seems to buy this, perhaps with a view to causing confusion and disarray.

But there appear to be some psychological issues too.This tendency to be tough on external security matters and soft on governance has roots somewhere.Is it innate Gandhianism?

Or is it the trauma of being labelled a mass murderer by the Opposition? This, after the communal riots that followed the horrible burning alive of 69 Hindu pilgrims in a train compartment at Godhra in 2002.

Then chief minister Modi and home minister Shah were legally cleared of all wrongdoing.But unlike the Gandhis, that brazen out any and all references to 15,000 Sikhs murdered after the assassination of Indira Gandhi, Modi still seems diffident.

In addition, there is basic neediness.Ever since Modi stormed the citadels of power in May 2014, he has chosen to be extremely gentle with the Opposition.

The truncated and demolished Congress could not believe their luck.Likewise, the TMC in their West Bengal bastion.

They, and a few others, quickly seized the initiative to create chaos in ParliamentGetting away with this, they took to the streets.

Modi did not act energetically to punish arson, violence, rioting, lynching, illegal road blocking.This softly-softly stance has become something of a leitmotif of his administration.

The NDA pushed through legislation in Parliament, including garnering support from other parties in the Rajya Sabha.This is commendable because it still does not have a majority in the Upper House.

But implementation has always been difficult.It is this pattern that has stopped land acquisition, the CAA, the NRC, and now the farm laws.

Is the Modi government intimidated by Opposition propaganda, supported by Leftist media both in India and abroad? It calls him arrogant and dictatorial.It says the BJP and the RSS are blatantly divisive and communal.

That this is a mirror image of the main Opposition is ironic.Pseudo-secularism apart, it has no difficulty in acting against dissidents.Prime Minister Narendra Modi, on the other hand, is out on a quest to be loved rather than feared.

Currently, there is much analysis on whether the farm laws were withdrawn because the alienation of the Sikhs is at stake.There is also talk of a sinister multidimensional plot aided by Pakistan’s ISI, other Islamist terrorists, Christian support groups, Khalistanis and China, to foment riots in multiple states.

China has apparently stepped up its support to the Maoists in central India and the insurgents in ManipurNSA Ajit Doval recently hinted at the existence of such internal fronts.The objective is to overthrow this government in 2024.

There is a very real threat along the Line of Actual Control (LAC).Pakistan is working on its side of the Line of Control (LoC) and along the International Border as well.  Still, economic reform paralysis if achieved is a victory for India’s enemies.

Britain is still welfarist and liberal under Boris Johnson, as is Modi’s India.But Thatcher thought the almost dictatorial post-WWII trade unions needed to be tamed.Loss-making public enterprises need to be privatised.

Coal mining needed to be shut downUnaffordable subsidies had to be withdrawn.It was a question of economic survival.

However, working-class people did not as their cheese moved.This is even in a small island country with just one dominant religion and ethnicity.And a population many times smaller than India’s today.

It blew up her bedroom but she was in the adjoining bathroom at the timeThe bombing was at the Grand Hotel in Brighton.Thatcher was attending a Conservative Party conference there.This was some time before Indira Gandhi was assassinated.Margaret Thatcher came to the funeral in solidarity.

Indira Gandhi was not an economic reformer in the Modi mould.She nationalised the banks and abolished the privy purses, strengthening India’s socialism.  She also liberated Bangladesh and confronted the Khalistanis.It was the last that resulted in her assassination.

Thatcher was able to retire with her stature intact.

But her tough conservative policies, her confrontations with the EU, eventually resulted in her own party tilting her out of the prime ministershipThatcher was Britain’s longest-standing prime minister nevertheless.

In international affairs, along with Ronald Reagan, she was instrumental in persuading Mikhail Gorbachev to dissolve the Soviet Union.

Reform, as in turning Turkey, the former keeper of Mecca, into a secular country was not easy.But a militarist Kemal Ataturk shoved it through.Emerging from the ruins of the Ottoman Empire, he saw the future of Turkey as a part of Europe.This dream was only partially realised, with romantic connections like the Orient Express.But even a secular Turkey was never admitted into the EU.

Millions of Turks work in Germany, for example, but as guest workers who need visas.Ataturk’s secular Turkey has now turned sharply towards Wahhabi Islam.But he is still seen, even under Erdogan, who wants to be the new Caliph for Sunni Islam, as the founder of modern Turkey.

None of the other leaders cited here backed down from their agendas.Can Prime Minister Modi win using a different methodology? Also, because this latest capitulation is seen, given the timing, as an electoral ploy.

It has already triggered calls to roll back CAA, revoke Article 370, and make a law to solidify MSP.

What next for the season of U-turns? Modi is not the only oneArvind Kejriwal does it.Mamata Banerjee does it.Rahul Gandhi does it.So does almost any politician put on the spot.Post-modernism calls for ‘fluid discourses’.Welcome to the third decade of the 21st century.

The writer is a Delhi-based commentator on political and economic affairs.The views expressed are personal.​