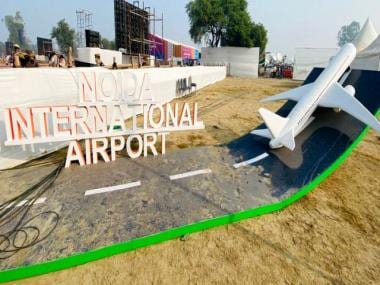 Prime Minister Narendra Modi on Thursday laid the foundation stone for the Noida International Airport at Jewar, which is expected to bring in investment in excess of Rs 35,000 crore to Uttar Pradesh.Construction work for the airport has begun and its operations will begin by 2024.Located strategically, about 72 km from Delhi’s IGI Airport and 40 km from the multi-modal logistics hub at Dadri, the airport is expected to boost the state’s economy in several ways.

The airport’s strategic location will create over one lakh job opportunities for the young from adjoining areas—Aligarh, Hapur, Greater Noida, Ghaziabad, and Bulandshahr.The airport will be spread over 1,334 hectares of land and will have a capacity to serve around 1.2 crore passengers annually.That number will go up to over 7 crore passengers from 2040 onwards.Job opportunities will come not just from work at the airport but also from allied industries like storage, defence and food.The Uttar Pradesh government spent Rs 4,326 crore on the acquisition of land, rehabilitation and resettlement.Hence allegations that the Yogi government went ahead without proper rehabilitation of displaced people are completely baseless.

The Jewar airport will also boost the Rs 10,000 crore defence corridor.An ambitious project, the defence corridor in Uttar Pradesh was launched by Prime Minister Modi in 2018 and Aligarh is one of the six nodes of the corridor — Agra, Kanpur, Chitrakoot, Jhansi and Lucknow being the other five.In Aligarh alone, 20 companies have submitted proposals for setting up units and 19 have been allotted 55.40 hectares of land.The companies have been able to cumulatively garner investments worth Rs 1,500 crore and 20,000 people will be employed with them, in months to come.

The Jewar airport, which is 50 km from the defence corridor, will help boost the industry besides providing employment to the area’s youth.Needless to add, good road and highway connectivity is the fulcrum around which development mushrooms and the “double-engine sarkar” of Prime Minister Modi and Chief Minister Yogi has been working at a feverish pitch on this front.

This expressway connects the state capital Lucknow to the eastern region, via Azamgarh.

With the development of this expressway, the eastern region of the state would not only be connected to Lucknow, but also to the national Capital through Agra-Lucknow and Yamuna ExpresswaysThe districts falling on this greenfield expressway are Lucknow, Barabanki, Amethi, Sultanpur, Ayodhya, Ambedkar Nagar, Azamgarh, Mau and Ghazipur.The Purvanchal Expressway is going to boost the economic development of the eastern parts of Uttar Pradesh like never before.

The Purvanchal Expressway will have 22 flyovers, seven railway-over-bridges (ROB), seven major bridges, 114 minor bridges, six toll plazas, 45 vehicular-underpasses (VUP), 87 pedestrian underpasses and 525 box culverts.The new expressway will have CNG stations, electric recharge stations for vehicles and will be connected with the defence corridor through the Agra and Bundelkhand expressways.

The Purvanchal Expressway has been designed for the movement of vehicles at a speed of 120km per hour, but the speed has been fixed at 100kmph.The expressway is among those that will provide future-ready road connectivity to all corners of the state.They include the already open Delhi-Meerut Link Expressway (96km), Bundelkhand Expressway (296km), Gorakhpur Link Expressway (92km), Ganga Expressway (600km), Lucknow-Kanpur Elevated National Expressway (63km).

Uttar Pradesh was once called a BIMARU state but today with a GSDP in excess of Rs 17 lakh crore, it is ranked second in ease of doing business (EODB).When the Yogi government took charge in 2017, only one-and-a-half airports were functional.Today, five international airports in Varanasi, Lucknow, Kushinagar, Noida and Ayodhya are either operational or close to being completed.Speaking of the 341-km-long Purvanchal Expressway, this 6-lane expressway is expandable to an 8-lane one and the per kilometre cost of construction works out to roughly Rs 11 crore.This makes it a highly cost-effective proposition because the usual per kilometre cost of a 6-lane expressway would be anywhere between Rs 14-16 crore, if not more.

The emergency landing provision for fighter jets makes the Purvanchal Expressway unique in every sense of the word.Those criticising the Modi government for the spectacular air show which had the likes of a Mirage 2000 landing on the expressway, is that very lot that ignored the defence infrastructure in the country for decades.

Just a few weeks ago the international airport in Kushinagar was inaugurated.Parts of a vast state like Uttar Pradesh were earlier cut off from each other to a great extent.People used to reluctantly travel to different parts of the state, as they were troubled by the lack of connectivity.

For the people of east Uttar Pradesh, even reaching Lucknow was quite a taskFor previous chief ministers, development was limited to where they had their homes.

Very soon new industries will start coming up around Purvanchal Expressway.In the coming days, in the cities situated along these expressways, work on products related to food processing, milk, cold storage, storage of fruits and vegetables, cereal, animal husbandry and other agricultural products are going to increase rapidly.Skilled manpower is essential to the industrialisation of UP.So, work has also been started to train the requisite manpower.ITI and other training institutes and medical institutes will also be established in these cities.The Defence Corridor being built in Uttar Pradesh is also going to bring new employment opportunities here.

When Yogi Adityanath came to power in 2017, Uttar Pradesh had two functional expressways — the 165 km-long Yamuna Expressway, which links Agra with the National Capital Region (NCR), and the Lucknow-Agra E-way, stretching to a length of 302 km.

In ten years between 2007 and 2017, the Mayawati-led Bahujan Samaj Party government and the Akhilesh Yadav-led Samajwadi Party (SP) government had completed just one expressway each.

But nearly five years since it took charge, the Yogi Adityanath government has completed the Purvanchal Expressway and work on three other e-ways has also started, with two, namely the 296-km-long Bundelkhand Expressway and the 91-km-long Gorakhpur Link E-way, in an advanced stage of constructionLand acquisition for the state’s sixth and longest, the 594-km-long Ganga E-way, is nearing completion and the prime minister is likely to lay the foundation for its construction in December.

Using the three expressways, the 1,000 km distance between Delhi and the eastern border of Uttar Pradesh can now be covered in under 12 hours.On the northern side (of the Purvanchal Expressway) is Gorakhpur, on the southern side is Prayagraj.Reaching Azamgarh from Lucknow took at least four to five hours earlier, now, within two-and-a-half hours one can go to Azamgarh from Lucknow.That will be a major advantage of the expressway.

The Purvanchal E-way has been completed in a record time of barely 40 months, despite two Covid waves.Originating in Gorakhpur, the Gorakhpur Link Expressway will pass through two districts — Kabir Nagar and Ambedkar Nagar — and join the Purvanchal Expressway in Azamgarh.

More than 30 per cent of work on the expressway has already been completedThe Purvanchal E-way is also being extended to the Ballia district, the easternmost part of UP, with a 30-km-long link.The 296-km-long Bundelkhand E-way, currently under construction, will be an expressway, right from the border of Madhya Pradesh, passing through Chitrakoot, Banda, Mahoba, Hamirpur, Jalaun, Auraiya and Etawah and linking the region to Delhi.

The Bundelkhand E-way joins the Lucknow-Agra Expressway in Etawah, linking the semi-arid and drought-prone region to the National Capital Region (NCR), through the Lucknow-Agra and Yamuna Expressways.This E-way is critical for the success of the Uttar Pradesh Defence Corridor, as a large part of the Corridor, including two nodes in Jhansi and Chitrakoot, lie in the Bundelkhand region.Construction of the expressway began in early 2020.Around 75 percent of the work on the expressway has been completed.

The Ganga E-way, the state’s longest, was first proposed in the late 2000s under the Mayawati government.However, the project’s environment clearance was cancelled in 2009 by the Allahabad High Court.

The proposed alignment of the expressway, it argued, was too close to the Ganga river’s channel and could damage the flood plains of the riverThis ambitious project has been revived by the Yogi government.

Now, the road has been kept at a safe distance away from the riverbank because any eco-sensitive zone will require a lot of approvals.The road is now closer to district headquarters.This is a better model.If the road is closer to the district headquarters, it will make connectivity better.In record time, despite the second wave of COVID-19, 94 percent of the land acquisition is already done and the tendering process is going on.

A government has to acquire at least 90 per cent of the land before issuing a tenderHence the entire process of tendering started from scratch after Yogi Adityanath took charge.

Akhilesh Yadav inaugurated the Agra-Lucknow Expressway hurriedly in 2016 when it was only 80 percent complete.It is evident that the Agra-Lucknow expressway was made in haste, compromising the construction quality by the erstwhile Samajwadi Party regime.Within just one year of its hasty inauguration, an SUV car plunged 15-20 feet after a road caved in on a crack in the expressway.

Many incomplete works of Agra-Lucknow Expressway were completed after the Yogi government took charge in 2017.List of unfinished works on Agra-Lucknow Expressway is long, which were completed by the Yogi government — 800-metre-long Bituminous Concrete, one long bridge, four interchange bridges, 22.2-km-long crash barrier, 37.5 km of road marking, 200 km of road signage, 289 km of medium fencing and 178 km of ROW.

In any debate on Uttar Pradesh infrastructure, the BSP talks about the 165-km Greater Noida-Agra Expressway, built in its time and the SP flaunts 302-km of the Agra-Lucknow Expressway.The truth is in the last 15 years of the SP-BSP rule, only 467 km of expressways, that too limited only to western UP, were built.In contrast, with Purvanchal Expressway and Bundelkhand Expressway, the “double engine sarkar” of Prime Minister Modi and Chief Minister Yogi is adding a whopping 641 km to the expressways’ road infrastructure in the state.And this 641 km will be achieved in five years versus the 467 km achieved over a long period of 15 years.With 91 km Gorakhpur Link Expressway and 600 km of Ganga Expressway, UP will enter a different league of high-quality road networks, across the state.

Today Modi-Yogi combine is working in tandem for the all-around development of Uttar Pradesh.

Along with connectivity, top priority is also being given to basic amenities in the stateIn the last two years, piped drinking water connection has been given to over 30 lakh rural families.From being a BIMARU state under previous regimes to becoming a vibrant state today, Uttar Pradesh has certainly come a long way.Seventy-four airports were built in 67 years before Prime Minister Modi took charge in 2014.In sharp contrast, a record 62 new airports have been built in the last seven years in record time.Now there are about 136 airports in the country.The Central government aims to reach a total of 220 airports by the year 2025 and this includes heliports and water ports, too.

Be it the Jewar Airport or Purvanchal Expressway, the double-engine sarkar’s ability to translate vision into reality by giving infrastructure the much-needed push, without any time or cost overruns whatsoever, is a textbook case of how Indian politics has truly come of age, with development being the driving force.

The writer is an economist, national spokesperson of the BJP and the author of ‘Truth & Dare: The Modi Dynamic’.Views expressed are personal.​